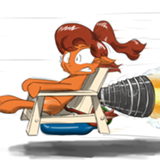 The thing is, I'm just a couple hundred words away from finishing The Casebook of Currycombs, the MLP-Sherlock Holmes pastiche I've been working on for nearly two-and-a-half years now. I'd really, really, really like to get it done, so I may end up skipping this round. We'll hafta see if any of the pictures reach out and rattle my teeth.

CoffeeMinion
#7 · 1 · 1 year and 2 months ago
I suppose I should have given my regrettably traditional “I’m out” message earlier, but I’m soloing the kids today and my wife flies home tonight, so my odds are basically nil.
Pascoite

Pascoite
#8 · 3 · 1 year and 2 months ago
I'll be available in #mentors and via PM tonight if anyone wants a critique/proofreading before they submit.
Light_Striker

Light_Striker
#9 · 2 · 1 year and 2 months ago
Aww, I wanted to get in this one, especially since I have a new machine to write on, but my brain was like “no, I'm busy being broken, don't ask me for inspiration right now”.

I'm going to try to do reviews of the art and stories, though!
Miller Minus

Pascoite
#12 · 4 · 1 year and 2 months ago
And since I forgot to look at first sentences in the individual reviews, I'll do a roundup here.

Okay, It makes me want to see what the hell Pinkie PAI is, and there could be quite a comedy of errors suggested by this. Middle of the road for me.

Apple Bloom blinked. In the instant that her eyes closed, and reopened, the universe lurched, and she woke.

More than one sentence here, but the actual first one is obviously a poor hook, and it's over soon enough, a reader isn't going to rely on that alone. It immediately suggests a very unusual happening. Universes don't often lurch, after all, so this has my interest. Pretty good.

Yes, Twilight, There is a Celestia:

Twilight thought she had gotten used to surprises after being friends with Pinkie Pie for so long.

This does immediately suggest that more is going on than is apparent, though linking that with Pinkie's presence is almost a given. Middle of the road, maybe a little better.

And That's When She Sees Us:

Celestia puts the newly-read scroll to the side. She cannot help but chuckle. Some things never change, for both Twilight and Pinkie. All she hopes is that Twilight doesn’t hole herself up in her multiversal studies with peculiar Pinkie by her side. And that bit about that magic nothing space Pinkie accessed that one time… typical Pinkie Pie!

The only thing of much interest here is the multiverse bit, and even that appears to be a non sequitur at first. It's not until the third paragraph that something out of the ordinary happens. On the weak side.

The Shadow Cast By Truth:
I'm not going to bother copying out lines here because it'd be tough to edit to avoid ruining the surprise, and it can be hard to say what constitutes a first line in poetry anyway. Honestly, the hook is going to be the poetry itself for most people. That'll define whether they're looking forward to it or gritting their teeth to wade through it. Story-wise, though, it's halfway through the first poem before I get a sense of what's happening and before that action is actually going somewhere. I'd call this middle of the road.

This morning, Tempest Shadow had two reasons to live

Nice. Right away, I know something's amiss, and it makes me want to read on to see what these reasons are. It's also not a dilemma I'd inherently expect of her. This one's good.

In Your Quietest Voice:

The mare walks carefully. Not quite cautiously; there is no fear in her step. Just learned deliberateness, each movement chosen with care.

This does hint at some conflict, but it's on the bland side. Even without reading on, I can see that it appears to be structured like poetry, so I'll get the same effect as the previous poem from knowing that. It'll also predispose me toward accepting something that's more atmospheric and introspective than a traditional story might be. Middle of the road, maybe a little better.

Across the lunch table, Gallus pressed the tips of his talons together, his thumbs upright like goalposts. He stuck his big, stupid griffon face between them and smirked.

The limited perspective here of calling him big and stupid already gives me a nice mood and touch of characterization. Nothing that interesting happens, but it still makes me want to see what this is about. Pretty good.

D15, coordinator, was a failure — ping any unit about it.

I could grab the entire first paragraph, but it doesn't add much to this. It does set up a conflict right away, so I want to see where it's going. Pretty good. By the end of the first paragraph, I did have an accurate taste of what the rest of the story would be like, for better or worse.

The princess steps through the doors, and unfolds.

I don't know what "unfolds" means in this context, but I would have guessed it meant she was relaxing or crumpling, and either one would convey a situation in flux. This is good for the promise of some conflict, so middle of the road or a little better.

At worst, some of these were bland, but none of them turned me off to the story, so this is a good batch.
horizon

horizon
#13 · 2 · 1 year and 3 weeks ago
Thanks to a reminder from Miller Minus, this round's folder is now created over at FIMFic, so you can add it if you expand it to 1000 words and publish there.

As usual, if you don't have permission to add your stories to the folder, poke me here or at FIMFic or wherever you can find me — to prevent spam, it's locked to "Contributor" status, which is given out to all authors who have participated in at least one Writeoff.