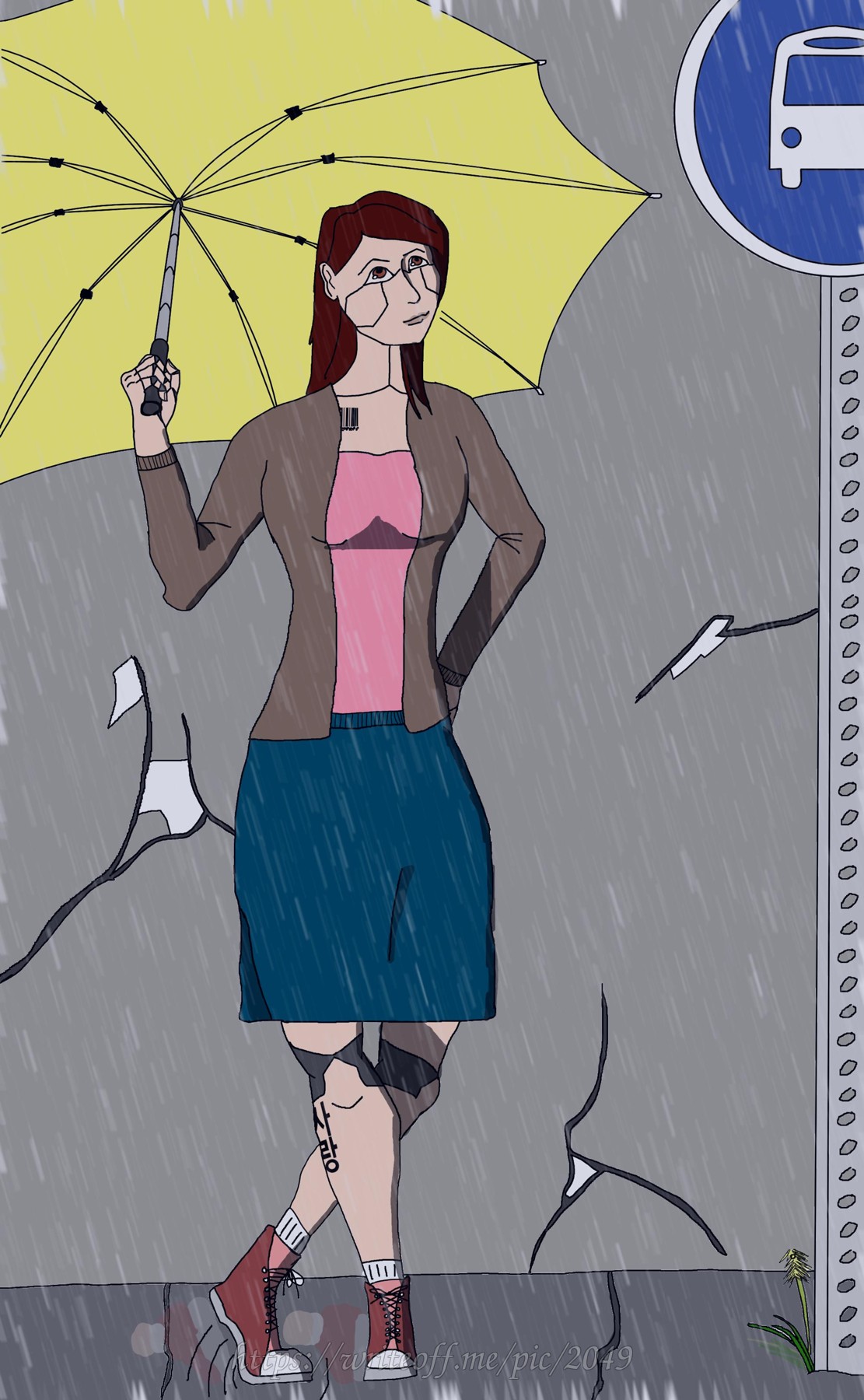 GroaningGreyAgony
#1 · 1 · 11 months and 6 days ago · >>Bachiavellian >>PinoyPony >>Bachiavellian
Careful with that umbrella, lest you short out!
This is okay on details and weird on proportions, due mostly to her torso being waaaay too long. (Perhaps extra room was needed for the internal fusion pack.)
The details of the drawing help, such as the well executed hand on her umbrella, the flower growing from the base of the signpost and her partial reflection in the rainy sidewalk. Artist, I think the largest thing holding you back is taking more care in planning your drawings; use the rule of eight (or 7.5) and actually place a ruler over your drawing and mark it out. Your details will be much more impressive when placed on a solid foundation.
I'm placing this piece in the middle tier.
Bachiavellian

Bachiavellian
#2 · · 11 months and 4 days ago
Like >>GroaningGreyAgony says, this one's got a bit of a wonky grasp on perspective and porportions. The shading also feels a bit funny to me, although I'm not well versed enough in drawing to say why. I do like the little touches though, like the reflection and the barcode. Thanks for entering!
PinoyPony

PinoyPony
#3 · 1 · 11 months and 4 days ago · >>Bachiavellian
Also a piggyback of >>GroaningGreyAgony Proportions are a tad-bit off. It's not enough to distract from the image and feeling that you are trying to convey, but is noticeable enough that it may need some fine tuning.

To gain another perspective, I'd like to draw attention to the umbrella- it looks a little funny to me. The spindles are at weird enough angles that it would have trouble delivering tension on the yellow canvas above correctly. Or... It may just be me. Perspective is a weird thing to toy with, and it's often a hard thing to capture.

All in all, Thanks for arting!
No_Raisin

CoffeeMinion
#5 · 1 · 11 months and 4 days ago · >>Bachiavellian
This must be a cyborgirl, and the juxtaposition of such a highly advanced artificial life-form waiting for a bus is delicious. Very expressive style. Have mercy, she's been waiting for the bus all day!
Bachiavellian

When it comes to art, I think I'm at that stage of picking up a new hobby when I'm starting to realize just how out-of-depth I really am. This was going to be my little foray into something with a better sense of perspective, but I think it ended up being a bit more than I could chew. Holy god the lips alone took like a solid hour of trial and error before they looked like anatomy that belongs on a human body.

Overall, I still had a lot of fun doing this, but man, am I rapidly developing respect for anyone who's put serious time into learning how all of this stuff works.

>>GroaningGreyAgony
I have a dumb explanation for the torso. I actually did use the 7.5 rule when I did the original sketch, but when I transfered to digital, I realized that I had made the face too long/tall for it to look very feminine. So I ended up shortening it by about 30%, and to compensate I shortened the torso and legs a bit as well. But it looks like I didn't do a good job of that. :P

Dear god in heaven, do not talk to me about her goddamned hand. I ended up staring at my own hand for so long that eventually I got sick of it and took a picture of it to keep open on my second monitor while I worked. It took me so long that I basically gave up on doing her other hand. Originally I was planning to have her other hand doing something near her face, like checking a watch or holding her hand out to feel the rain. But yeah, that plan went out the window when I realized how difficult digits are to draw.

Thanks for your thoughts!

>>PinoyPony
Can you believe that I spent like 2 hours looking up proportion/figure videos on youtube? Goddamn, this arting business is tough! :P

Yeah, there was a moment where I kind of realized that there should have been another umbella rib in the front middle, but then I'd have 7, which struck me as weird. Plus, I had kind of sort of accidentally did the umbella's coloring on my lineart layer, so I decided to just cut my loses and leave the damn thing the way it was. Perspective is a bitch, yes.

Thank you for your thoughts!

>>No_Raisin
Only two 'c's? I'll have to try harder and earn that coveted third 'c' next time. :P

>>CoffeeMinion
Fun fact: Originally, she was just supposed to be a regular girl waiting at a regular bus stop. But, well, I'm addicted to sci-fi, so about halfway through the sketching process she turned into a robot or a cyborg or something. :P

Thanks for your thoughts!