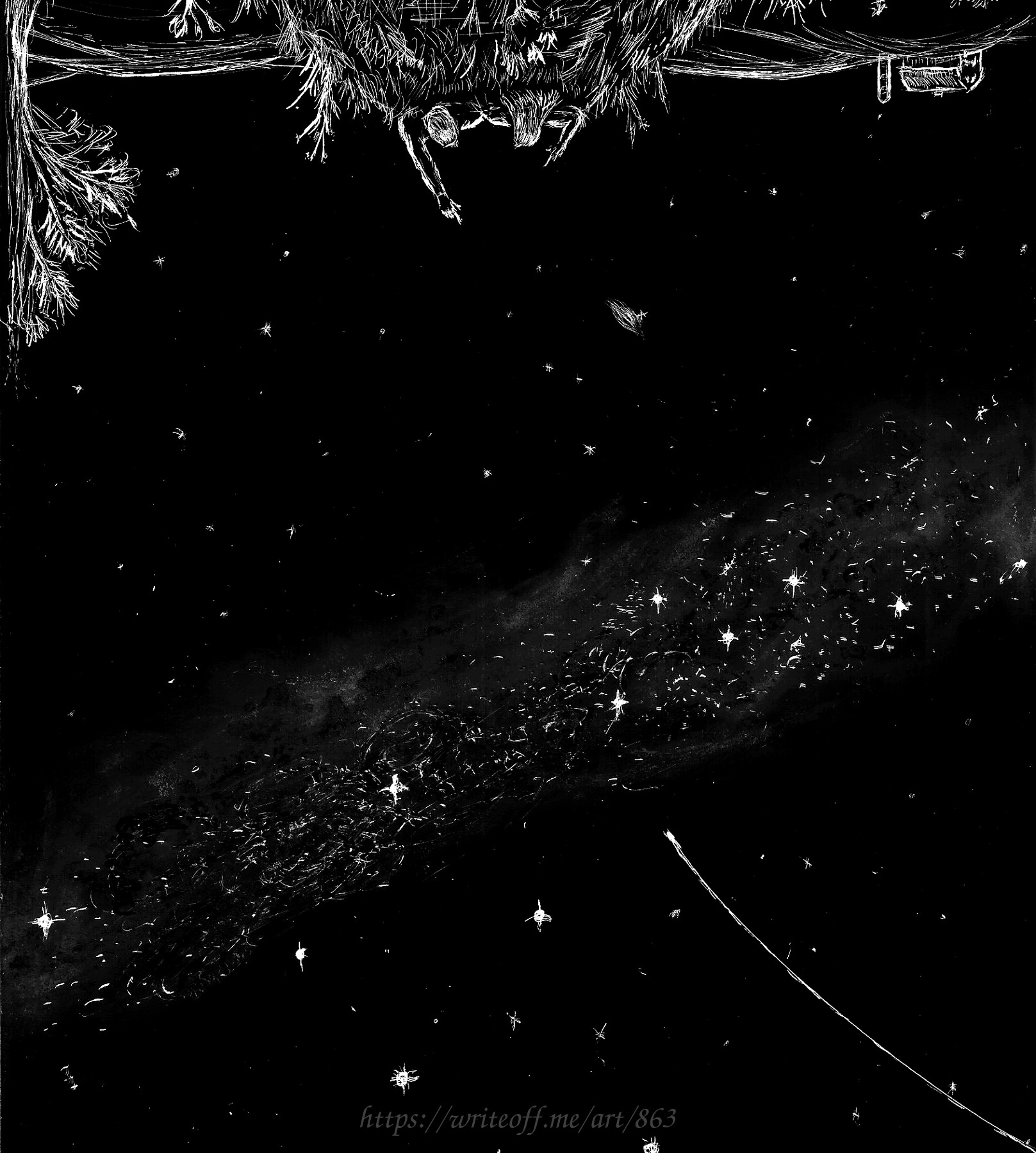 Did you turn your pic upside on purpose? I'll assume yes. As for what it could imply, aside from the cheapest way to not have your characters looking up and thus, fitting the prompt, I can't tell.

Also, looking at the night sky is a trope for inspiration. Your drawing is cool but as an inspiration for an OF round, yeah, not really original. Still a good one, thank you for that.
Pearple_Prose

Pearple_Prose
#2 · 1 · 3 years and 4 days ago · >>GroaningGreyAgony
I agree with Fenton in that I'm not sure it's superb as a prompt for an OF round, but I think the art itself is lovely, and I love that it's upside down, as if you could "fall" down into space. I think it's really neat.
TitaniumDragon

TitaniumDragon
#3 · 2 · 3 years and 4 days ago · >>GroaningGreyAgony
I've seen a few things musing about how the only thing keeping us from falling off into space is gravity, and I think this works well for the prompt. My only real issue with this is that while this is a neat orientation for a space drawing, it doesn't quite work here; there's nothing on the ground that feels like it is clinging to it, so instead of giving the impression of falling off into space, the piece just looks upside down.
enamis

enamis
#4 · 1 · 3 years and 4 days ago · >>GroaningGreyAgony
Can't say anything other than this is the perfect embodiment of the feeling of space, and it fits the prompt oh-so wonderfully as well!
Not_A_Hat

Not_A_Hat
#5 · 1 · 3 years and 3 days ago · >>GroaningGreyAgony
As children, me and my siblings used to play this game where we'd collect mirrors from around the house, and then hold them in front of us facing up, and then walk around looking into them and pretending we were walking on the ceiling.
MLPmatthewl419

MLPmatthewl419
#6 · 1 · 3 years and 3 days ago · >>GroaningGreyAgony
Amazing. Also, is that a Star Destroyer? Or is my mind playing tricks on me?
Dubs_Rewatcher

Dubs_Rewatcher
#7 · 1 · 3 years and 2 days ago · >>GroaningGreyAgony
This one's great too. You really get a good sense of the gravity here. I did a photoshoot a few years ago with a similar concept—perspective is a lovely thing. :D
GroaningGreyAgony

We think of space as being up, but it’s all around us in all directions, including the way we point when we say “down.” Not only is it also down, it’s the furthest down we can perceive. And the Milky Way, being from our perspective a band of light that stretches around the sky without end, is also the ‘longest way’.

The simplest way that I thought of to convey that space is down (It’s where the enemy’s gate is, after all) was to make a drawing of a night landscape on Earth and invert it, so I did. The medium is scratchboard, and at first I was puzzled on how to render the Milky Way realistically, but then I hit on the idea of using a white eraser to add some gray tones. I worked in two real constellations (Cassiopeia and Canopus) and added an attempt at the Andromeda galaxy (It’s not a Star Destroyer, sorry!).

I added a streak of something entering the atmosphere for potential story purposes. I also included a reference to a noted American artist, which no one seems to have caught. Can anyone name that artist? :)

Thank you for the comments and praise!