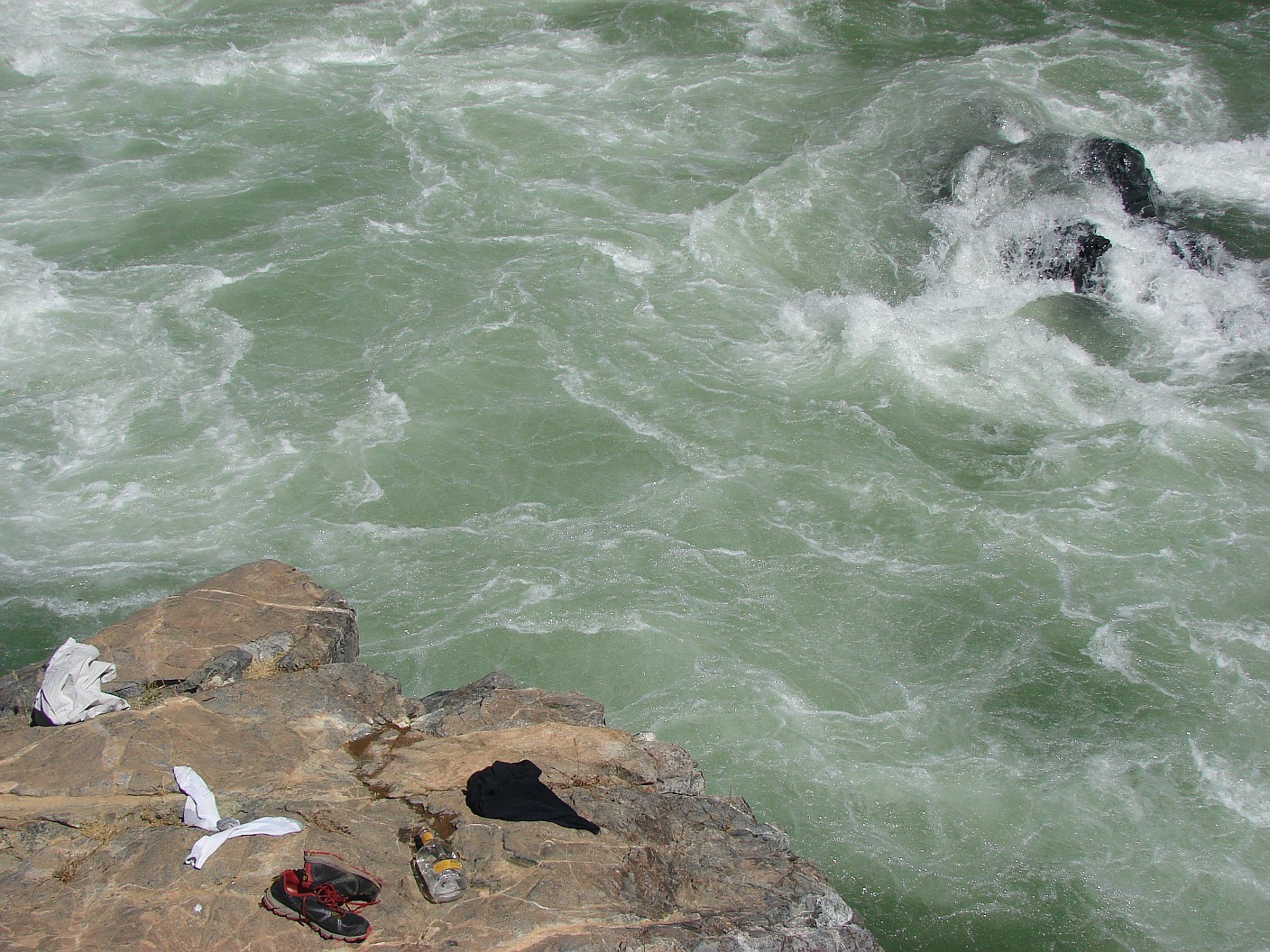 TitaniumDragon
#1 · · 3 years and 4 days ago · >>horizon
Nice! I see you went into the dreaded OUTSIDE to take this picture. It looks lovely, and the green water full of rapids really contrasts nicely with the rock here.

I enjoy the implication; the bottle of booze with the spilled liquid, the shoes and socks off. There's a strong implication of suicide here, but you can play with other ideas if you're of a mind to.
GroaningGreyAgony

GroaningGreyAgony
#2 · · 3 years and 4 days ago · >>horizon
Nice work. I don’t see a note, so suicide is not my first guess, but a person swimming while drunk in rushing water is likely to reach the same result. Upper tier.
Fenton

Fenton
#3 · · 3 years and 4 days ago · >>horizon
Same here, very evocative. I thought about the suicide interpretation but it is not the one I'll favor since the person actually put off his clothes.

Great photo. Up in my rank you go.
Pearple_Prose

Pearple_Prose
#4 · · 3 years and 4 days ago · >>horizon
This is a really neat photo. Very appropriate, and I like the clothes and the spilled booze in the bottom corner.
Not_A_Hat

horizon
#6 · · 3 years and 3 days ago
I feel like we're getting a lot of entries this round that are telling stories well through implication. It's almost like we set a bunch of authors loose with artistic media!

I'm going to have to think about how to score photography against traditional arts, but I like this an awful lot as a composition. The constrasting colors, the balance between the rocks in the lower left and upper right, even the way the spilled alcohol curves on its way to the rock edge. Whether or not it took a lot of work to get this shot, the way everything works together makes me feel like it did, which is to your credit. If I had to nitpick, I'd point out that the shoes and socks stand out strongly, but the ... shirt and jacket? Shirt and pants? ... are just sort of formless lumps, which aren't really pulling their implicative weight. Still, nice job.

[EDIT - Post-competition note to people linked here from outside: Since entries are posted anonymously and participants review each others' work, sometimes fake self-reviews are posted in order not to tip people off to which entry is yours through the fact that you're not commenting on it.]
Dubs_Rewatcher

Dubs_Rewatcher
#7 · · 3 years and 2 days ago · >>horizon
Either my first or second favorite of the contest. There'll be some soul searching to do later, I suspect...
horizon

horizon
#8 · 9 · 2 years and 11 months ago · >>TitaniumDragon
Art retrospective! Mostly because there's a funny story behind this one I want to share.

As with all powerful art, this took both effort and a huge heaping helping of luck.

So when I saw the prompt, I realized that — living out in the middle of some beautiful mountainous country — the possibility of entering a photograph as art was screaming for attention. The problem was that the deadline was super early Friday morning; Mon-Weds I was working all day, and Thursday I was free only up until a late afternoon work presentation. It wasn't like a drawing/painting where I could work on it in bits and bobs: I had to set aside a block of time to travel to a photoshoot site, set up the shots, and travel home, and I didn't have quite the right equipment for reasonable night shots. But if I was careful on timing I could do a Thursday thing.

But then Thursday rolled around and the morning vanished, which wiped out my first choice (the Sierra Nevada crest, where I could go climb a mountain and get photos off the edge of a cliff), and I looked at fallbacks closer to home. I live only half an hour away from the Foresthill Bridge, which is 220m (730 feet) high, and assembled some gear for a trip there, including a locking tripod so I could get a camera well past the edge of the bridge for a look straight down. However, at the last minute I wondered whether that would really work and googled some bridge photos: apparently in the last couple of years they've added giant barriers to the sides of the bridge to discourage suicides, which would have made it very awkward to try getting photos. So that was out. I turned to my fallback plan: down to the South Yuba River where I swim every summer; there's a big jumpy rock over the river about a mile upstream of the Bridgeport covered bridge, and it was the most photogenic "long way down" I could think of (the surroundings were a lot nicer than just driving to some random traffic bridge).


There was a catch though. When I got down to the jumpy rock, this is what I expected to see:

... but due to California's exceptional rains this year, what I got was ... well, see the rock in the middle of the river in the upper right of my entry? That's the same rock formation from the middle of the pic above. Suddenly the "long way down" of the jumpy rock wasn't quite so long.

At this point I doubled down: I was there for an art project and damn it I was going to find some Long Way Down. I started taking photos like crazy. That is the overriding principle of good photography: Take insane amounts of photos. Multiple angles, multiple exposures, multiple framings (ALL the framing), multiple subjects. Variations you don't think you need and twice as many that you think you might. When you're done and sifting through the pile later on, some of those are going to be better than others through sheer random chance — and the public only sees your finished product. Stack the odds in your favor!

Climbing a trail to well above the river didn't really end up working out:

Nor did looking down from the jumpy rock:

(You can see in the shadow there that I had mounted the camera on my tripod and was holding the tripod out over the edge. Because that put the camera beyond arm's length, I put the shutter on a timer. That worked well but it also significantly increased the setup time of each shot.)

I found some good spots at the water's edge and tried to play around with the concept of falling, using the camera timer to scramble down the rocks downstream and into frame:

I liked that well enough, especially after I played with angle and framing to get the above. But I had immediate concerns about entry anonymity because even with face covered I'm pretty sure someone would have recognized me.

Then I tried playing around with the river itself, and the "Long Way Down(stream)" I ended up using for the title. This used the same strategy I was going to use out on the Foresthill Bridge — get as close as I could to the edge, and use the tripod as a "super selfie stick" to position the camera far beyond arm's reach.

Naah too mellow where's that whitewater

So I had something enterable. I kept shooting, because that's the other golden rule of photography: Keep taking shots. If you stop once you hit "something you like" you miss the chance for "something you love"!

I tried going back to the top of the jumpy rock. I really wanted something jumpy-rock-y to work, because it was what had brought me there in the first place. I shot a bunch of crap that I could tell was going to turn out unusable because of the core problem when dealing with nearby rocks and distant background: photography flattens out the foreground/background distinction (it was too light to play with f-stops to effectively give me an out-of-focus background, plus putting the river out of focus just meant a big green mush) and just gives you a jumble of colors. I needed to anchor the foreground somehow. Hmm. What did I have on hand? Take off my shoes and go with a narrative of someone jumping in?

This is when my other lucky break kicked in. I hadn't brought any props, but I had stumbled across an empty bottle of Fireball whiskey in a shady spot a little ways back from the edge. And I was wearing shoes. And socks. And clothing ...

[img]http://i.imgur.com/9p4lBwj.jpg[/img]
(Pictured: The photographer and his resources)

So I had my core idea. I had my alcohol bottle and an unexpected opportunity for a full-body suntan and an infinite supply of whisky-looking river water. (I had to carefully position the bottle to hide the label lest someone call me out on Fireball actually being amber-colored.) I had a jumpy rock, and a way to finally maybe take a good shot with it. Cue up:

Mmmmh okay there's a good photo in this concept but this isn't quite it.

My biggest lucky break of the day was the placement of the alcohol bottle. I had filled the bottle about halfway, and set it on its side somewhere it wasn't going to roll away; I let the water inside just splash out and drain away. The S-shaped drainage pattern was a beautiful coincidence. I couldn't have asked for a better addition to the shot from an element I only picked up on the scene.

But I didn't like the framing of that shot. The river felt incidental.

Better! But that was the best of my further-away shots; I couldn't frame a good one without foliage in the way, or without zooming in enough to start losing the river again.

This is when I realized that, if I climbed a little cliff above the jumpy rock, I could get the benefit of distance along with a better angle and no foliage.

So that's the story of how the final shot involved a dude wearing only underpants and a camera doing some bare-footed rock climbing.

Shortly before some other folks rounded the corner on their way toward the lunch spot nearby. I EARNED MY SILVER THANK YOU VERY MUCH

Anyway, I hope that this inspires further photographic entries! I don't want to be the only one.
horizon

horizon
#9 · 1 · 2 years and 11 months ago
>>Dubs_Rewatcher >>Not_A_Hat >>Pearple_Prose >>Fenton >>GroaningGreyAgony >>TitaniumDragon
I'd respond to individual comments but I think all I really need to say is "thank you". That goes for everyone who viewed and voted as well! ^.^
TitaniumDragon

I was totally right about it being yours, too. Can't imagine why I would imagine the search and rescue person might take a picture out in the middle of nowhere!