Long Story Short · Original Minific · 23 Dec 2017
Organised by RogerDodger
Word limit 400–750
Show rules for this event
Jeremy
I never thought you’d kill me. Actually, that’s a lie. I always knew, but I didn’t expect it to be now. There were still jobs that required my skills, we still shared common interests, and yet...

It was because of the Hong Kong conspiracy, wasn’t it? You started acting differently back then. I have no idea what you saw during that dive, but it changed you. At the time I thought it was an improvement. I should have known something was up the moment you said you were quitting booze. No one believed you, of course. How could they? Jeremy “Scotchy” Headrow suddenly claims he’s going clean? What a joke. To think I was so impressed. Instead, you replaced one drug with another.

This is my third time, you know. Now dying doesn’t hurt as much. Little J kept saying it only hurts the first time, but we both know he’s full of crap. I still don’t know why you kept him around for so long. Lying can be a useful tool, but only if with purpose. Little J lies for the sake of it, and doesn’t give a crap about the consequences. And usually I’m the one who has to clean the mess.

They say those that fear death have already died a thousand times. I wonder what that makes you. Of course you only imagine it. I’m the one who’s actually dying, with the single hope one day I might be brought back again. No assurances, no certainty, just the slightest glimmer that my skills might be useful again. You’ve already used the app, so I know that the next time you close your eyes you’ll forget me completely. I’d hoped you’d have the courage to say goodbye, but... let’s say I know you well enough.

I’ll miss our games of go. The nights we would spend sweating over the board until you inevitably won. Always by two and a half points. Do you think I would have won that game in New Cairo? Would you even tell me if it were so?

I’ve just one last question before I go. Who will you replace me with? At least tell me that. I don’t care about Kiev or all the fun times we had together. I already know your thoughts on that. The only thing I want to know is who.

My reflection twisted in the mirror. It was done. Prince Jeremy was no more, and he had taken all his hacking skills with him. From here on I wouldn’t be able to rely on myself to cut through the system’s ICE protocols. That wasn’t a problem, though. I could hire an elite hacker with the money I had. For the moment what I most needed was firearm knowledge.

“Hello, Jeremy,” I said to the mirror. “We have work to do.” My secondary personality laughed inside my head. He knew exactly what I was thinking.
« Prev   5   Next »
Icenrose 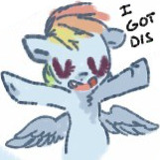 Icenrose
#1 · · 2 years and 2 months ago
Hooray, I got a cyberpunk story! Just what I wanted for Christmas. Thank you, Writer! ^^

I think it’s a neat choice to tell the story from the perspective of the disposable personality, right before it gets deleted in favor of “someone else”. That’s about as dystopian as it gets, and I love the story for it. I have to wonder if the app builds an AI companion based on your personality that just happens to possess the relevant/desired knowledge, or if it’s modifying and sectioning off a part of your own mind and uploading the skills to the partition in your brain. It’s not terribly necessary to the story itself, but it’s the sort of thing I’d like to read about if you expanded this later on.

The only real feedback I have is that you might want to put a line break of some sort between the third-to-last and second-to-last paragraphs to make it easier to register that we’ve switched POVs from Prince Jeremy to Jeremy Prime. Though, it’s interesting that he addresses himself in the mirror as Jeremy, as though the person in control is not Jeremy, and Jeremy is, in fact, the secondary personality, riding shotgun while the downloaded app personality is calling the shots.

If this is indeed the case, it’s a way darker story (not a bad thing, mind), and you might want to make it a bit clearer that’s what’s going on. If it’s not, Jeremy should address the new secondary personality in his head by a different name, in keeping with the standards set by the naming conventions used by the other secondary personalities.

I like this story quite a bit, though. It’s an interesting take on respeccing your character, but in real life, and the potential ramifications of doing so.

Zaid Val'Roa
#2 · 1 · 2 years and 2 months ago
I'm not sure why my brain won't process it, but what I think is happening is that the MC is some sort of hacker/cyborg doing hacker/cyberpunk things in a cyberpunk world, and is shedding a personality/AI for the sake of its "mission" and whatever that entails, and the personality that's getting deleted/stored whatever is reminscing about all the things it did in the past in Hong Kong and New Cairo before Jeremy takes on the new persona.

At least, that's how my food addled mind interpreted it.

The problem is that I don't know how much of that is implied in the story and how much my brain made up, plus the inner monologue didn't really win me over, which is weird, because I normally really like those. I assume there's no line break because the transition from one personality to another is supposed to be immediate, but that just adds to my confusion.
GroaningGreyAgony

GroaningGreyAgony
#3 · · 2 years and 2 months ago
It took me a few reads to get into this one as well. Perhaps sugarplum visions are distracting my story-interpretation sub-personality, or perhaps that’s something you might work on, author. One thing I found confusing is that I take it that Prince Jeremy dies after the sentence “The only thing I want to know is who,” but the story plunges right on in the first person and I had no sense of discontinuity. There should be some sort of transition there, in typestyle or otherwise.

Another question: how is he going to miss playing go if he’s being retired as an active process? Are such processes conscious at all when backburnered, or are they completely non-sentient in the interim? If the former, that should be emphasized more.

Monokeras
#4 · · 2 years and 2 months ago
So I’m a bit confused here. It’s pretty clear a former personality says goodbye before being replaced by another one. Yet, I don’t really know what the character is. The way you wrote, you imply there’s a master personality, a sort of operating system, that decides and operates the context (personality) switch. Yet we don’t know because all we get is a monologue.

Generally speaking – and if I’m not mistaken – schizophrenic people do exhibit multiple personalities, but no single one is aware of the others, there's like an airtight bulkhead between them. What you depict here is not realistic, so I suppose this might be some sort of android? I don't know. It’s weird.

Matter of fact, as I said on the chat, you could’ve ended like this:

I fished my cellphone out of my pocket and punched the conventional number: “Operator,” I said, “Please feed the super-skilled sniper program into the hitch ASAP. Thanks.”

Like yeah, this would be fine in a Matrix background. As is, it’s floating in the void, and the lack of context means we can’t really figure out what’s the meaning of the whole story.
AndrewRogue

You should have run a soft break before "My reflection twisted in the mirror..." to better indicate the change in perspective.

This is a neat idea and I really want to like this story because there is some cool stuff going on here, but ultimately it ends up falling a bit flat because it is mostly a bit of naval gazing with a fully passive protagonist. I really think this story would be better served as a dialogue. If I really think about it, this is actually structurally pretty similar to Monsters in that we have a resigned protagonist facing death. But the added ability to bounce off another character offered more strength in Monster, as did the fact that we had our protagonist facing a bit of an internal struggle regarding what they had spent their life doing.

Here it is mostly just reminiscence, which, while it definitely conveys certain moods and emotions, it just isn't as engaging. It is a big change, but I really do think you can keep the same themes and ideas while running this as a dialogue and it'll be stronger for it.

Consider ending on "We have work to do." It's a stronger line that better conveys the nature of true Jeremy. The AI riders are just tools. The job matters. It sells the callousness. Everything after that is filler.

I want to make some snarky Android: Netrunner reference here, but I can't think of one, so... I dunno. I guess Jeremy better hope he doesn't hit a Neural Katana next run, eh?
libertydude

libertydude
#6 · 1 · 2 years and 1 month ago
The central idea is pretty interesting: a person with an alternate personality in his mind that he’s abandoning forever. The story certainly explores that in an intriguing way, showing just how strange of a relationship these two have. I also liked how the characters talked about themselves and others like they’d lived with them for years, instead of talking about them as if introducing them to the reader. I have no idea who Little J is, but the narrator’s attitude toward him makes for good reading material.

The major downside with the story is that so many ideas are presented that the 750 word limit keeps us from really understanding what’s going on. This story alone talks about people “dying” more than once, doing a job in nations around the world and a unique form of hacking that one of the main characters requires. All juicy topics to be sure, but maybe a bit too much material to tackle in such a small space.

As is, it’s an interesting conceptual work, but lacking in most other areas. Expand it with a longer word count and flesh out the details, and I think this will work much better.