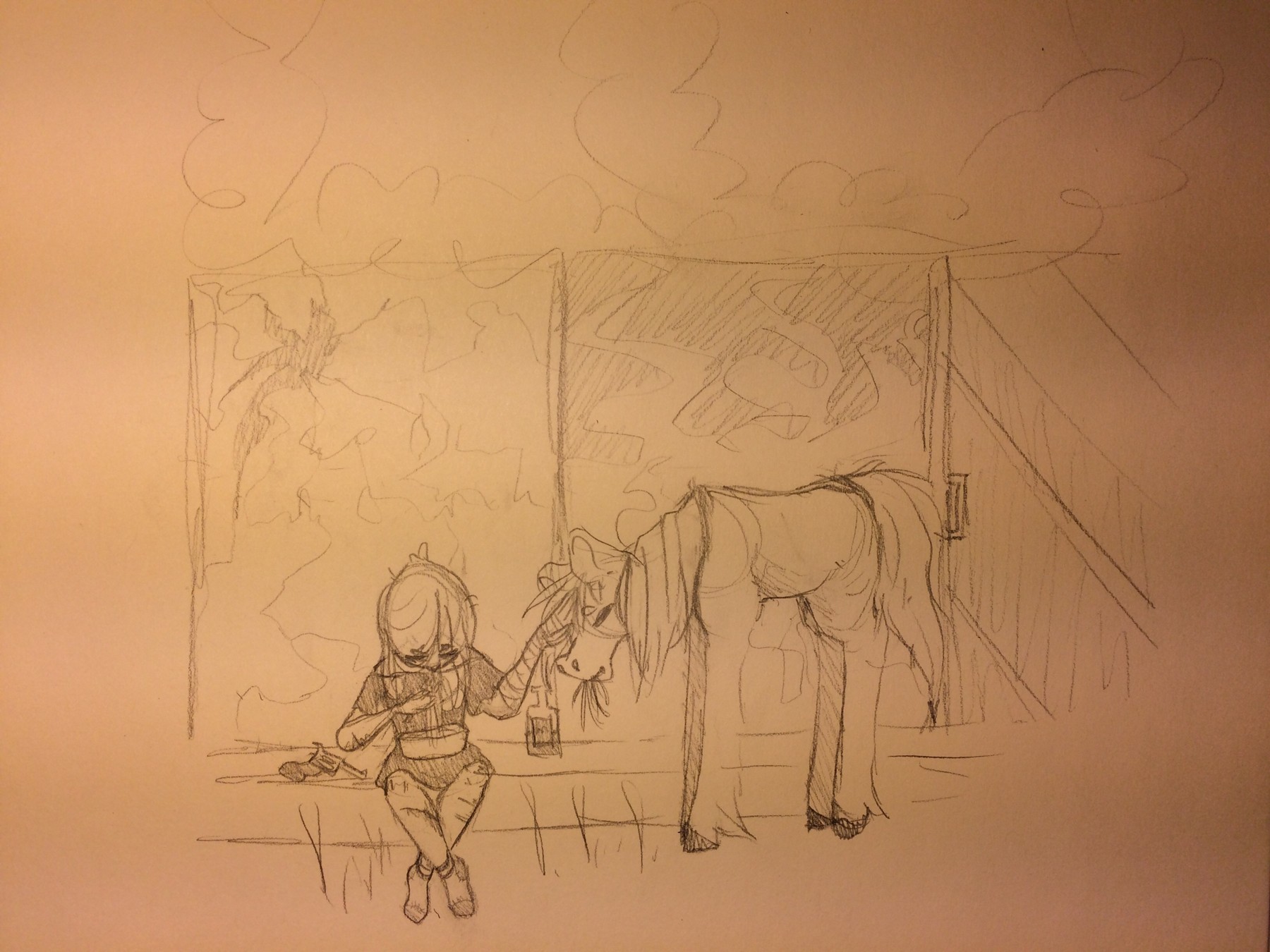 I’ve mentioned issues with proper scanning of pencil art for greater clarity in the past, and so won’t go into detail about it here.

There is plenty of talent on display here, Artist, but one problem is that I have to study the drawing to perceive it. I love the figure forms (though the horse’s boardlike legs bother me, and I wish we could see more of Dorothy’s expression). However, I think this piece suffers most from lack of contrast and clarity. While the figures have some outlining, the background elements are present but unclear. Is that a fence with trees and bushes, or a door with flames and smoke? Some more delineation and careful outlining will help to make things clear.

Overall, this has the makings of a good piece, and some polish would make it a very good one. Regardless, you’ll still be going in the upper tier in this round. :)
horizon

This has excellent use use of story elements, and strays from the story itself to good effect (at least, I don't remember Dorothy actually patting Cisco at any point). What I said about "Better Not Look Back"s sketchiness -- reserving the attention to detail for the most important parts of the composition -- applies here as well, although I would have loved to see more detail put into the background to show us the house on fire, which feels like it should be a striking part of the overall effect. Also, not sure what Dorothy's actually eating here. So, good detail in the details you provided, but this is a piece that's going to want even more of it.

Framing-wise, the cabinet on the right is good in the sense that it offers the picture some sorely needed background anchoring, although I'm not as much a fan of the way it unbalances the piece, putting some dead space on the right. I wonder if maybe you could have played with the way the background showed the flames -- putting a more pastoral scene on the left that gradually descended into chaos with the burning house on the right?

Thanks for the art, at any rate!
Miller Minus

It's my favourite, la-la-la, I love it so much, psst if you're having trouble scanning it check out how it looks through a simple B/W filter, there's not a thing wrong with it, yippee-wahoo gold star.

Thanks for entering :)
Rao

Rao
#4 · 1 · 1 year and 5 months ago · >>Anon Y Mous
Little late and light on the commentary for art because I'm a philistine, but: I like this a lot. I think it encapsulates the "lots going on in a relatively small area" feeling the story gave me. Also: contains horse, so I can't not love it at least a little bit.
Anon Y Mous

I know that background was a major problem for this piece for you guys, and I think so, too. Plus lighting. Darn my dad's cave-like house!!!

When I drew it out even I didn't know what I was doing with it. I had hoped to draw her sliding window doors, but since it was pretty hard to illustrate that it was slid open, I guess it didn't show.

Thanks for reviewing, anyway. ;)