And at the End, You Shall Remain Alone · FiM Minific · 15 Dec 2018
Organised by RogerDodger
Word limit 400–750
Show rules for this event
The Game of Thrones and Ponies
Twilight sat comfortably on her throne, levitating a goblet of dark wine just within her reach. She glanced beneath her at the map of Equestria, lavender flags dotting almost all regions of interest.

She sipped the wine and declared, “Just as I planned. My opponents lie vanquished and my forces control every corner of Equestria."

But she was not alone. Opposite of her stood Rainbow Dash, her wing outstretched in defiance. She raised her hoof and yelled "I won't let you win."

Twilight gently raised her hoof to cover her mouth and smugly laughed. "You won't let me? Oh, dear Dash, you were invaluable pawn in my grand scheme. You made my victory possible to begin with.”

“What?” Rainbow Dash back-paddled without thinking. “No, you are just trying to mess with my head! Your mind games won’t work on me!”

Twilight closed her eyes and sniffed the rich aroma of her bitter drink. “It was far too easy to ignite rivalry between you and Applejack. A simple observation here, a snide remark there. And when fighting started neither was willing to stop, that is until you won.”

For a moment Rainbow Dash averted her glare. It did feel good at the time to prove her awesomness. But the feeling faded quickly, being replaced by the bitterness of the current situation.

Satisfied with reaction, Twilight continued with gloating.“And we can’t forget our darling Rarity. So trusting, so naive. She earnestly believed that our discreet alliance would protect her from you, seeing you as the bigger threat. A mistake on her part, one she won’t be repeating any time soon. All of you danced like puppets on my strings."

Twilight continued to gloat, "The hard part was getting rid of Pinkie. She was a wild card, so naturally she had to go first. I was almost stopped but in the end I prevailed before any of you were any wiser.

“And then there was Fluttershy..."

Twilight casually waved her hoof. “Please, I didn’t need to do anything. She wasn’t even a player.”

Enraged, Dash flapped her wings. "That's it! You are going down right now!"

"You forget Rainbow, it is still my turn. It is my attack that will decide your fate. So say your prayers and roll your dice. It is your last stand."

Rainbow grabbed her dice with her wings. She blew on them and tossed them as hard as she could. Her heat pumping faster and faster as dice slowly lost momentum. And then they stopped. "Hah! Two fives! Beat that!"

Twilight casually rolled her dice and she received two sixes. "I win."

Rainbow Dash flipped the friendship table and stomped out. Right before she left through the door she faced Twilight and said, "Risk is a dumb game anyway."

In sweet silence, Twilight sipped her wine. "And at the end, I remain alone and victorious. For I am the princess of games."
« Prev   2   Next »
Anon Y Mous

Samey90
#2 · 1 · 1 year and 5 months ago
Risk, Diplomacy, and Monopoly – most definitely the easiest to test your friendship (but I guess Monopoly would end with everyone hating each other).
Foehn

Foehn
#3 · 2 · 1 year and 5 months ago
I play tabletop RPGs with a group of friends. The other week, the DM hadn't had time to prepare anything, so we decided to give Risk a go instead.

It ended up with one person demanding a rematch, and the rest swearing never to touch the game ever, ever again.

What I'm trying to say is cute piece, author.
TitaniumDragon

TitaniumDragon
#4 · 1 · 1 year and 5 months ago
I got a smile out of this, and ponies playing Risk is an amusing idea, but it is hard for me to really be thrilled by it; it was cute and was a decent enough read but it won't really stick with me and there wasn't anything here that was especially memorable.
Pascoite

Pascoite
#5 · · 1 year and 5 months ago
If there are going to be Game of Thrones references in this, they'l go over my head.

A few editing issues. Nothing that inhibits understanding, but enough that it does hurt how well the story is presented.

The perspective jumps around a lot, and the atmosphere immediately puts me in the mind of this all being posturing over a game, so it's not going to surprise me when it turns out that way. Let's see if you do something else with it.

Well, no you didn't. You kind of play all your cards up front. If Twilight weren't so over the top at the beginning, you might have suckered me in to thinking something nasty was going on, but when I can spot the twist right up front, then the rest of the story is just a prolonged confirmation, there isn't a lot to it. I don't have a lot to say about this. It's just a pretty standard "they were only playing a game" story.
Posh

Posh
#6 · · 1 year and 5 months ago
This is funny, but the twist is too obvious. What's more, it doesn't really need to be a twist. Telegraph from the start (intentionally so) that the ponies are playing a board game/inhabiting characters for the sake of the game, and you'd have a stronger piece.

Also would let you play up the ham a lot more, too. ^^
Cinder_Vel 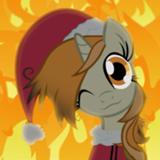 Cinder_Vel
#7 · · 1 year and 4 months ago
So the results are in, masks are off and now is the time for a grand reveal, yes? Well truth be told there is nothing really to say, was just a spur of the moment made with intent to make people smile. If you cracked even a tiniest smile then my goal was reached, if you expected something more well sorry to disappoint.

Still was fun for me, might join another time. Maybe even actually comment on the stories instead of lurking in the shadow.