You Cannot Force a Willing Mind · Poetry Minific · 06 Jul 2022
Organised by Anon Y Mous
Word limit 15–1000
Show rules for this event
A Dreary, Harrowing Dilemma
I took a step towards my goal,
But then got called away
The sparkle of another whim
Just pulled my thoughts astray.

The golden trails they leave turn dark
And fade into the sky,
But still their afterglow persists,
Bright scribbles in my eye.

I do not profit, chasing wisps
As iron time scrolls on,
But what I think is lusterless
If I should bid them gone.
« Prev   3   Next »
Pascoite

This is another one that could be taken to argue either side of the issue. The speaker has trouble staying focused and easily follows distractions, but it's ambiguous whether he finds those distractions worthwhile to follow or obstacles to his progress. I would guess the former. It's one of the more concrete entries this round, where I can easily understand what it's talking about.
Troposphere

Troposphere
#2 · 1 · 6 months and 3 weeks ago
This is really the only one of the bunch where it's plain and clear what it's saying. It doesn't quite have the lyrical force I felt from "A Parting of the Ways" (interestingly, it has almost exactly the same form), but being understandable can excuse worse flaws than that.

The approach to the prompt is ever so slightly subversive: What I get from the poem is that even if the mind is in principle willing to stay focused, it still can't be made to. Thus, you cannot force a mind period, no matter if it's willing or not.

The title needs to chill, though.

>>Pascoite
Hmm, I can't hear anything wrong with the first line. Perhaps it's a dialect difference? Various online dictionaries suggest that pronouncing "towards" with two syllables is less common in American English than in British.
Corinna 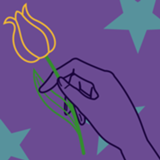 Corinna
#3 · · 6 months and 3 weeks ago
I adore this.
It feels so cozy, resigned but not disheartened.
Technically proficient. Not especially complex or impressive because it doesn't try to be.
Just enough to catch my whim for a moment, then fade into the sky.
At least that's my impression.