Pleasant Nonsense · Original Minific · 04 Jan 2020
Organised by RogerDodger
Word limit 400–750
Show rules for this event
Day In, Day Out
The door swung shut behind him with a gentle click as he looked around the empty kitchen. His keys landed softly on the stool, cushioned by a stack of unopened bills. A coat soon followed, letting off a cloud of dust as it did. The noise of the television in the next room muffled his footfalls as he walked to the small kitchen and opened the fridge. Inside were various condiments and containers, but he reached for two slices of pizza wrapped in plastic.

They went onto a plate, and the plate into the microwave, and when the machine hummed to life he slumped into one of the three chairs at the table. With one hand he unlaced his heavy boots, the other set against his leg holding him up.

Feet extracted, he stood with a slight groan and stretched towards the ceiling. His pants bumped against the table and left a dirty splotch against the painted wood. He looked down and resisted the urge to beat at the garment with his hands, eyeing the dusty brown tracks leading across the white floor from the door.

For a moment he reached for the broom, but the sizzle of cheese and the aroma of cooked dough pulled his attention. He waited, counting down the seconds as his eyes tried to focus on the machine in front of him. He rubbed at them and came away with yet more dirt. Even his fingernails had become packed with it.

A quick rinse in the sink removed some, and there was still more, but his stomach was growling.

At that moment the microwave rang out with a clarion call and, as if summoned like the wild hunt itself, there came the pitter-patter of running feet from the other room. A weight like a small pillow crashed into his leg and latched on with a giggle. “Gots you!”

Red ribbons on straw hair peaked around his leg and smiled up at him coated in a new layer of dirt. He felt his face twist for a moment with annoyance but it quickly devolved into resignation. He schooled his features, letting out a long suffering breath. “Daddy’s tired. Where’s mommy?”

“Mommy went quiet time.” She said pointing toward the living room couch. A black shirt emblazoned with ‘-rill’s Steak House’ hung from the arm, the rest of the text covered by a shock of hair.

He started to mutter something but glanced at the girl and bit it back, instead opting to pull the plate from the microwave. When he sat down he found her to have disappeared, but she came back with a sheet of card stock gripped in her tiny hands.

“Mades it!” she said, holding out a page of macaroni, glue, and glitter, “For daddy!”

It was utterly unrecognizable, but he accepted it anyway. “It’s so pretty,” he said, fatigue lacing his words, then turned towards the wall and tacked it up with all the others. “What are we gonna do with all of them?”

“Makes more!” She said. “Oww!” She had already filched a hot slice of pizza and managed to drop it by the time he turned back.

With another heavy sigh he grabbed a stack of Wendy’s napkins from a drawer. The slice left a wide red splatter as he peeled it off the floor while also managing to pick up a pair of long auburn hairs. “Didn’t you already eat?”

The girl, a look of shame dominating her face, grabbed the napkins from his hand and dropped them on the mess. She shook her head.

He dropped the slice of floor pizza on the plate and grabbed a knife while she pawed at the mess. The second slice was cut into small neat chunks. Then she was scooped up and dumped in the chair before it.

Her eyes widened when she saw the bite size pieces, and she immediately reached for the food. Even standing in the chair she was only head and shoulders above the table top, but it was no obstacle as her ravenous energy saw her gobbling up everything faster than she could chew.

He chewed on his floor pizza and watched her as she ate, pizza sauce oozing between her fingers. She was a needy, messy, annoying, expensive distraction.

She caught him watching her and smiled at him with a gap toothed grin, sauce covering her face. He reached for her, napkin in hand, and smiled back.

The only thing I'd like just a bit more of is the mom. The one image we get of her doesn't quite coalesce into a picture for me--her shirt is hanging from the arm of the couch with the text on the front of it partially covered by her hair? How does that work physically? Has she taken her shirt off and wadded it up as a pillow? Maybe give me a half-empty vodka bottle on the floor, too, something to complete the picture, and I wouldn't mind another smell or two to really evoke the scene. 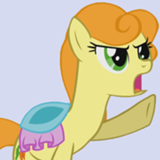 Chris
#2 · · 1 year and 10 months ago
The moral of the story is that kids are terrible and the last line is the Stockholm Syndrome speaking, right?

I kid, I kid. I work with elementary students for a living (though, in my defence, I get paid to do it).

Anyway, I agree with BB that I'm getting a really solid image of two-thirds of this household, and it'd help me if I knew a little better how part three fit in. Specifically, I can't tell right now if dad is sort of annoyed with her but also sympathetic, recognizing that they're both working full-time and all, or if he's fully disillusioned with her (and of course, I have no idea at all how accurate either set of feelings would be, from the text as presented). It's a big difference between the two, and the text doesn't resolve onto one or the other.

But that image of a little tyke charging up, zeroing in on the only dirty thing in the house, stealing food and immediately spoiling it... this all has the ring of truth to it, so to speak. You did a great job of making this scene feel real, and joking aside, I loved the last line. Kudos!