This is a special event that looks to have writers create a polished entry. To that end, there's a lot more writing time. There's also a #mentors channel where you can get help and feedback from people that you are allowed to reveal your authorship to. 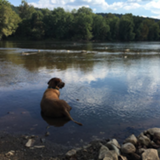 This is a game I lost
#1 · · 2 years and 10 months ago · >>Kai_Creech
Redwall and Brian Jacques. I miss that man. Nim, as well, and Rescuers. Some Discworld, a lil. Despereaux? Watership Down, even. Anyways. I SUSPECT. But hush.

Jesus. This hit me right in the childhood. All my books were about talking animals and mice and fun little light-hearted stories where the villain dies at the end through no significant fault of the hero and everyone lives happily ever after mostly. Some blood.

Nostalgia is coloring my vision here, obviously. But this is a wonderful story with a powerful nostalgia that I'm not willing to let go of.

The characters are cute and delightful and things are kept simple enough that I don't get lost in the details. I dearly desire more of this sort of thing; there's darkness aplenty already, and I'm a sucker for happy endings.

More or less to come!
Kai_Creech

Kai_Creech
#3 · · 2 years and 10 months ago
>>This is a game I lost
More like Redwall and Discworld at the same time.
Not_A_Hat

I don't really have a lot to say here, except... I do think the meeting between Taymer and Chayli is a bit too smooth and fast; they meet, and bang, their friends. It's fairly believable, but later on, he's very, very convinced that animals and humans should be singing together, and it doesn't feel as weighty as I think it should, because he seems to have just kinda fallen ass-backwards into it by sheer luck. If that was tested a bit more, if one or the other had to make a serious effort to bridge the gap, he'd be more convincing when he talks about it. Adding more weight there would also help add weight to when he actually puts it to the test with resurrecting the animals.

Honestly, though, there's a lot to like here, and it's all very well put together. Jaxie wanted professional-level stories, and I think he got one. Well, if this is written by who I think (- talking animals + poetry? Yeah -) that's not really a surprise, but still. :P

Good work, thanks for writing!
TitaniumDragon

TitaniumDragon
#5 · · 2 years and 9 months ago
I got some serious Redwall vibes at the start of this story. Whiskers, animal people, elderberry, and of course, the mention of food. I’m hungry, now. :raritydespair:

And after Snow dropped to all fours to approach the protagonist, I definitely got into the sense of a mouse world. Who told you my secret weakness?

One of the commenters noted that this hit them “right in the childhood”, and that’s exactly what this felt like – a children’s story (albeit with some aspects, like spending the night with Snow, which I wouldn’t expect in such a story, Lady and the Tramp notwithstanding, so maybe a YA story with the veneer of a children’s story). And a reasonably enjoyable one at that. This story was memorable, and while it had its imperfections and sudden leaps of story logic, on the whole, it hung together pretty nicely.

There are some stories which attempt to invoke a certain sense of wonder at a different world in them, and I think this story did that pretty well – we get the start, with the mouse folk, and then we see them in the real world. But what I really liked was that this subverted the usual tropes of “magic versus humans” stories, as well as the common presentation of Humans as Cthulu in certain sorts of mouse world stories. We get the whole “science is bad” and “humans are bad” and “if we don’t keep the real world out we will die” sort of thing from the mice – and then that’s subverted, with the humans being presented as people, with the focus on the child protagonist particularly exemplifying the idea that humans aren’t actually bad. The child protagonist also really helped to reinforce the idea of this being a children’s story. And this all worked well for me.

My biggest issue with this story is that there isn’t much of a sense of narrative tension here – the resolution (humans and mice working together) felt too neat, like it just sort of resolved itself, rather than actually having any sort of build up, as Taymer immediately jumps to the conclusion that humans and mice can do magic together. I think it would have been more dramatic if that particular revelation had been held off – basically, Taymer at first thinks that making the harp must have been his own magic, and that he alone has magic in the world, but he can’t bring the mice back to life with his song, but then the girl recognizes the tune, and she joins in, leading to the fusion. That would have made the ending more effective, I think.

Overall, this was one of my favorite stories in the competition, but it definitely had problems. I really liked that this averted the whole “Science/humans = bad” thing that is so prevalent in stories like this, but at the same time, the conflict and resolution is really weak here. I actually felt bad for our hero when his mousey love was separated from him and possibly killed by the poison gas, which is a strength, but the story didn’t really have a strong pay-off.
Cold in Gardez

Author, I’m sorry. I ranked this story as my #3, but under duress. It rubbed me wrong from the beginning (anthropomorphic animal stories are not my thing), and it never grabbed me at any point. The conflict was minimal and the resolution/victory unearned. It boiled down, in my reading, to Oh we can do magic together, let's sing and bring our dead friend back to life, yay.

That sounds harsh. But this was an actual line from the story: "How he was doing it, he had no idea. But he couldn't deny the shiver he felt simply from putting his claws to these strings."

Get that? It just happened. The magic was inside them all along.

And yet… It’s a good story. As much as I didn’t like it personally, I can’t deny that it’s a good story. It’s just not a good story for me, and I have to be honest that in every other respect it’s an excellent product. I felt like the plot and resolution were lazy, but the descriptions were excellent throughout. Even now, after reading and judging all the stories in this contest, only The Fixer’s two main characters stick in my mind more than Snow or Taymer.

So, I’m sorry, author. I didn’t like this one much, but I recognize quality when I see it. If you want me to rank this higher next time, be more ambitious with your plot or your themes. Just making the characters fuzzy animals and the solution to life’s problems “magic” won’t cut it for me.
Baal Bunny

I can live with that. The first writing contest I ever entered more than a quarter century ago, I got a third place for a talking animal story, so it does seem to be my lot in life :)

Still, I've been working on a few points that I hope will address some of the issues folks have raised, then I'll be submitting the thing to the Exploring New Places anthology Fred Patten is editing for FurPlanet books.

Thanks to the judges for putting this together!