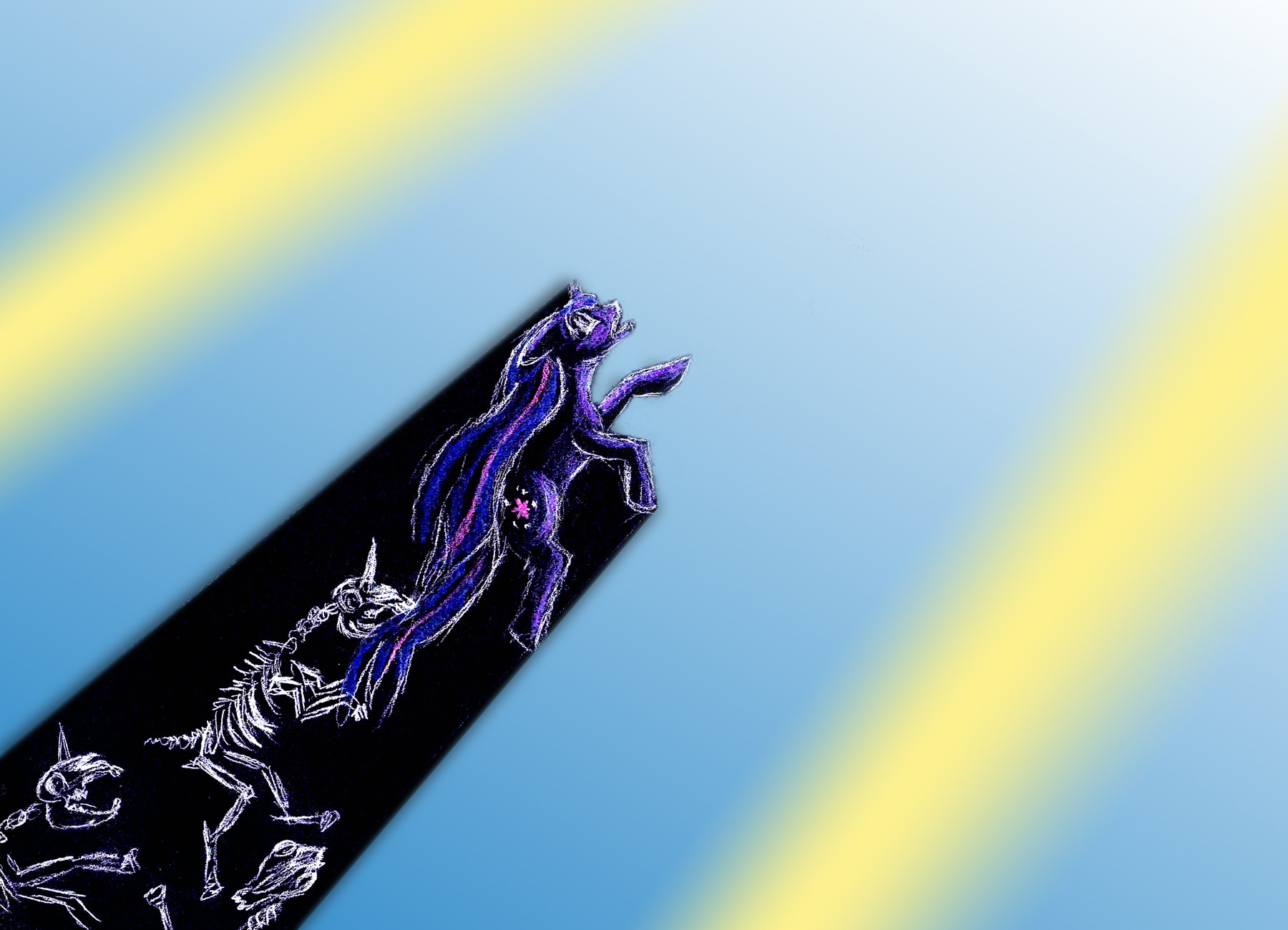 Comma Typer
#1 · · 3 months and 2 weeks ago · >>GroaningGreyAgony
For being based on a parody of Christian songs, the alt-text comes off as gut-wrenching.

As for the picture itself: the chalkiness of the drawing gives it a dark feel; also makes the skeletons look like they're trapped in an archaeological dig in a museum. The (most likely computer-generated) smooth gradient only makes the gritty chalkiness stand out more, especially considering the fate of Twilight in the story.

To be honest, though, it feels very nice to have one's story be chosen as a subject for a pic, especially when there's only two pic submissions in. So, for both the picture itself and for it being related to my own story, thank you!
Bachiavellian

Bachiavellian
#2 · · 3 months and 2 weeks ago · >>GroaningGreyAgony
I really like the shading work you did on Twilight's body. It really helps cement the contrast between the light and shadow portions of the piece. Overall, the entire concept of this is really inspired, and visually it makes an impression very quickly.

Just a couple of nitpicks: I kind of ended up thinking that there ought to be some of the black shadow behind Twi's forward hoof, given the angle of the light. And as an entirely personal-taste suggestion, I think it might have been cool if some of the skeletons behind her were overlapping and cut off by the border between light and dark, just to increase that contrast a little more.

But really, I have no idea what I'm talking about when it comes to art, and this is good. :)

Thanks for arting!
horizon

horizon
#3 · · 3 months and 2 weeks ago · >>GroaningGreyAgony
I like the general composition of the piece, though I'm not sure the details feel like they're all pulling in the same direction.

The chalkiness of the figures is perfect for the skeletons, but it makes Twilight's figure feel off in a way I'm finding hard to articulate. The shadow she casts is super stark and dynamic, but then it contrasts with the soft gradient of the sunbeams in a way that makes them seem … off? Googling pictures of sunbeams, there's sort of a combination of hard and soft edges which create an interplay between light and shadow rather than just colors; I think something like that would have really enhanced the effect of Twilight's stark shadow rather than creating a sort of three-focused piece with black and blue and yellow.

I wonder if it would have worked better having a more defined, sharp-edged Twilight facing the light and then losing definition as she fades into the shadow. And while the skeletons are a pretty visually compelling component, perhaps darkening them some so that there was more a sense of subtle ghosts in the shadows.

Regardless, a thought-provoking piece. Thank you for arting, *cough* unknown mystery artist!
GroaningGreyAgony

This was an idea I'd been kicking around as the art period progressed, but I only made progress on the last day. The black wedge was done in pencil on black paper, and the sky and beams rendered in Photoshop. I wanted to add more skeletons and blend the wedge in better with the background, but ran out of time.

See you all soon!