Hiding in Plain Sight · Original Minific · 09 Jun 2018
Organised by RogerDodger
Word limit 500–900
Show rules for this event
State of Mind, NY
The contents of this story are no longer available
« Prev   23   Next »
HiTime

HiTime
#1 · 1 · 2 years and 1 month ago
Good Stuff: This pushes all my buttons, and I loved it! It's sweet without being disgusting, it's sassy and nasty but in a way that makes the sweet stuff that much sweeter, it's got a nice progression from resentment and impatience to something more humane and inspiring, even if only in little ways. Creative use of the prompt too! The character voicing is unbelievable. I feel like I know Morgan and his ma, and that they're New York toughs but still with humanity inside them that goes above their stereotypes and makes them work. I also like the regular realism, like his initial lie, the way he resents how obvious she is, and how they use The Hobbit as a way to poke at each other. Long story short, I loved this one! It's just... I keep coming back to "humane" and "humanistic" and "humanity". It's wonderful.

Bad Stuff: The phonetic accent felt too exaggerated at times, though that might just be me. The last few words of the piece don't strike the right note for me; this is at heart about the fact of humanity even in a nasty place like New York, so ending on gruff swearing felt like it suddenly veered too far away from sweetness and too far into just plain rude. It's anticlimactic to me. Maybe if it had blended it more with that sweetness, like a final summary of what the whole fic was about, it would have been stronger. But I'm really nitpicking here.

Verdict: Top Contender. It has its faults and off-notes, but the melody and the themes of the story and the surprisingly balanced tone between saccharine and bitter just does it for me. Even if it doesn't win, I feel like it deserves to get a medal and a round of applause. I love it that much!

Right. I will give all these fics reviews, but not right now. I'll come back.
Monokeras

Monokeras
#2 · 1 · 2 years and 1 month ago
I found the phonetic writing really jarring. I mean, I understand it’s part of the ambiance you want to set, but it makes thing harder to understand. The prose gets in the way of the reader, which it shouldn’t be — and that’s especially true for non-natives. It didn’t take me much effort to guess what the real words were, but even that little effort is too much: it sets the focus on the words themselves, while words should bow and yield to their contents. Besides, I’m not sure it adds anything to this story to have the protagonists being black. Is that part and parcel with the drama?

Maybe it’s because the prose kept tick me off, maybe for some other reason, but I couldn’t connect with the story. At the end of the day, I’m still left way at arm’s length. There’s something missing here, somehow. The emotions on show don’t reach me. I find them… not artificial, but… superficial maybe? Or contrived? I can’t tell, but it doesn’t click.

So, I’m not sold on the prose, and the contents left me unconcerned. Sorry, author.
Paracompact

Style, Form, and Grammar: In my opinion, the use of the black vernacular was stellar. It added exactly the right amount of flavor, and didn't obfuscate the language in the slightest (and I say this as the whitest Wonderbread around who is very rarely satisfied with heavy accents in writing). As for the narration, though, I feel the explicit descriptions of Morgan's emotional turmoil were a little heavy-handed ("Morgan’s heart cracked like glass" / "not because his mother would hit him, but because she would miss" / "Morgan felt his heart plunge an inch" / "If only it could do something for the sharp sense of shame gripping his stomach"), and there was a weird fixation on how sopping-drenched his clothes were (it sounded as though he were constantly only seconds removed from a swimming pool).

Characters and Dialogue: Both the mother and the son are done excellently, overall. If I were to make a suggestion on Morgan, though, I would try to hint at larger things in his life that might be behind his pessimism. Then again, for an already-efficient flash fiction like this, such a change might just cause more harm than good.

The descriptions of "anger" and wanting to "wipe that smirk off his mother's face" also came off as a bit severe, since otherwise I got the impression he truly loved and respected his mother.

Plot and Pacing: This plot is entirely character-based, so I've already covered that. The pacing, however, was just perfect, in my opinion. Started with the book, went to the window and had a natural conversation, ended with the book. Unlike a lot of flash fiction, its goal of "tell the story of an aging disciplinary mother trying to tell her young'un to chin up" is neither too lofty nor too mundane, and it achieves it with just the right amount of subtlety.

Final: All in all, this gem will feature near the top of my ballot, and having gotten through half the fics so far, it's currently my top vote.
Dubs_Rewatcher

Dubs_Rewatcher
#4 · 4 · 2 years and 3 weeks ago
Heh. As a New York native, I appreciated this. Definitely got an atmosphere—but if you're trying to really evoke New York City, why is everything so nonspecific?

This takes place in a hospital—which hospital? Sloan Kettering? Mount Sinai? Bellevue? What neighborhood are our characters from? What bus line does Morgan take where he finds the cranky drivers? There's so many. What stores does he see from the window? You're taking great steps to turn New York from just a setting into a character of its own, but we need more to ground us and make the city come alive.

And I'm going to agree with 2/3rds of the above commenters that the phonetic accent didn't work for me, and very quickly dove from realistic into caricature. And in a story like this, toeing that line between "realistic" and "uncanny valley" (it exists in literature too!) is going to be your biggest challenge.

Loved that last line. Despite my misgivings about her accent, Ma is a lovely character—harsh, but loving in her own sharp way. Morgan could stand to be fleshed out more, but even this snippet gives me a good idea of his personality.

I like this. I want to see it grow.
DumpsterDweller 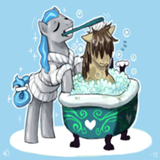 DumpsterDweller
#5 · 1 · 2 years and 3 weeks ago
Wow, never expected you to do this sort of thing. This fic nearly slipped past my radar (even the title felt like I should probably skip it), and the phonetic spelling in the dialogues was a bit awkward for me too, but the overall experience was nice. A little generic, tug-at-the-heartstrings sort of thing, but not bad at all.

For me, what really makes it stand out is the setting, rather than the plot. Most authors make things "comfortable" for the reader with this type of story, choosing nice, clean, well-spoken people who we are expected to instantly feel sorry for when their life goes astray. Meanwhile, the more realistic and less "refined" people of the world are ignored, perhaps even looked down upon, which is why it's nice to see a story try to inspire some much needed sympathy for them. Of course, in this fic, the characters are still rather "tame", so I feel like you could have gone much further to challenge the reader, making the two even harder to like at first before showing their humanity.