GroaningGreyAgony
#1 · 2 · 1 month and 3 weeks ago · >>Paracompact
I appear to be in. Anyone else?
Paracompact

Paracompact
#2 · 2 · 1 month and 3 weeks ago
>>GroaningGreyAgony
Do not worry, you will not be alone this round :)
Bad Horse 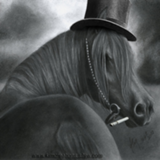 GroaningGreyAgony
#4 · 1 · 1 month and 2 weeks ago
>>Bad Horse
I agree with you, even though the rule works mostly to my benefit nowadays.
FWIW, you can make a group now and set the deadlines as you please.
Paracompact

Paracompact
#5 · · 1 month and 2 weeks ago on Persistence of Mission
A pretty straightforward story, all things considered. I've always been a fan of flash-fiction entries that aren't, well, overly flashy! Just a well-written little scene is the key to my heart.

At any rate, I do have some questions about the relevance and continuity of things within this story. Chief among them is that I don't recall that there was ever a prophesy known to Celestia that Twilight's life (let alone Spike's egg) would be key to Luna's resolution. This is implied in several lines, namely "one of the possible pieces should have been here by now" and "You have performed a great service today, one that will resonate from now into time and restore hope to the future." Unless I'm really forgetting something from the show's lore, this renders the connection of the egg to the Celestia/Luna conflict very tenuous, and I wonder if the story wouldn't have been improved by simply not invoking that conflict?