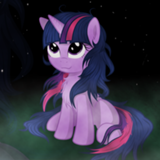 Dreamy Days
#25090 · · 2 weeks and 4 days ago on Continuance · >>Rao
Thank you all for your feedback. This is my first time writing a story in years, so I had no doubt I would be somewhat rusty. It's also my first time participating on this site, and I hope to use it to improve some more. I'd like to provide some of my thought processes that went into writing the story, and compare what I intended to your feedback.

>>Winston
Celestia's plan was indeed extreme, but that's why I thought this would be an interesting topic to explore. You said you had trouble believing that she would ever do this, and I agree, if she were thinking rationally. But I was hoping I made it clear enough that Celestia was specifically avoiding thinking about it rationally, and when Luna suggested she go to bed and sleep on it and she'd change her mind, Celestia knew that she was right. Which is why she avoided going to bed and instead stubbornly wanted to push her plan forward immediately. Everyone has a breaking point, no matter how strong they are, especially in the face of strong and terrible emotions like those of losing a loved one, and I was hoping that would be demonstrated here. If you didn't understand these things in the story, perhaps I need to work on ways to make them more explicit in the future.

Surely, the results of the conversion of everypony in Equestria into Alicorns would be extremely interesting. However, I felt like that scope far outstrips the 750 word limit. That's more like the territory of a novel. This scene was the best way I could think of to demonstrate the weight of the dilemma, although perhaps it wasn't as successful as I hoped.

>>Rao
Does who died matter? I felt like it didn't, for the scope of the story. I think the most important parts are the fact that it was somebody Celestia loved dearly, and their loss finally broke her after thousands of years. I felt like explaining beyond that would be a waste of precious words.

While Equestria is no doubt a diarchy, I always felt like Luna was much more passive as a ruler than her sister was. Especially after her return, I felt like Luna still feels unsure of herself after going down the path that led her to become Nightmare Moon. Thus, I felt like she would be comfortable with trusting Celestia to know what is best for Equestria, since in her eyes, Celestia has never gone off the deep end and tried to harm ponies as much as Luna has. When Luna said that she trusts Celestia to make the right decision, she didn't mean that she trusts her "to see the error of her ways," as you put it. She actually meant that she trusts Celestia to make the best decision for Equestria, no matter what it is, even if that means turning everypony into Alicorns. If Celestia believes that is a good path for everyone's welfare and happiness, Luna will support her, no matter what. I realize this is a lot of implication to glean from a couple of sentences of dialogue, so I will be sure to try to imply these things much more clearly in the future.

>>Baal Bunny
Why do you believe this story takes place after the ending of the series? If I implied that in any way, it is certainly a grave error. Unfortunately, I saw no way to give more background without preserving the important parts of dialogue that actually speak of the dilemma that is the focal point of the story. I do not want to blame the word count limit, since the essence of a good writer is being able to tell a good story despite any such limitations. So perhaps I should have focused on other details, and the dialogue I presented here was not actually the most interesting part of this scene.
Dreamy Days

Dreamy Days
#25096 · · 1 week and 6 days ago on Continuance
>>Rao
Thanks again for the insight, I appreciate it. Hope whatever you're going through gets better soon.