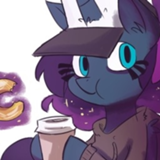 18 Feb 2016
Murmurpunk
drilled a hole into my head, pierced the bone and felt the breeze
Overview Entries 1 Posts 4

Murmurpunk
#2131 · 6 · 4 years and 6 months ago
It's been a long time since I entered a Writeoff. My last one was Illusion of Choice, all the way back in November of last year. I dunno how many of you might remember what happened with my entry, but it doesn't really matter anymore. I'm as ready to jump back in as I'll ever be, so here I am.

I wouldn't say I only recently got done licking my wounds. I made my peace with that round a week or two after it all went down. I guess it's just been a mixture of not having any ideas for a Writeoff and not having any motivation for a Writeoff. Plus, I've been busy with an account move and school and personal issues. Just hasn't worked out until now.

I had ideas for a few of the prompts immediately while I was voting on them. This prompt is one of those, so I wrote an entry and submitted it. I guess we'll see how it goes.
Murmurpunk

Murmurpunk
#4223 · 6 · 4 years and 3 months ago
Hey, folks. I know it's been a while since we've done one of these, but the irreplaceable Quill Scratch and I recorded an episode of Radio Writeoff. Was about half my reasoning for doing it because Roger said he'd change our name color in the Discord chat? Yes, but that's not important. What is important is that we recorded it and you can listen to it right here.

Quill has a nice voice and a nice microphone, whereas I had to take a walk around my neighborhood with my phone since I can't record in my house. Gonna try and get that fixed for next episode, but for now, please be comforted by the crunches and pops of nature. Or something.
Murmurpunk

Murmurpunk
#2677 · 4 · 4 years and 5 months ago on Second Chance
Alright! Finals are now over, so I guess it's time for me to jump in here and start talking about my story. So, as is now obvious, I wrote Second Chance. I'll start with the standard postmortem, then I'll address some of the common criticisms of the story, and then I'll move onto addressing individual commenters for anything they may have said that didn't fit with the common criticisms. Also, for those interested, I recorded an audio version of what I'm about to type here as well. This has been a sort of audio-centric round, what with the fic readings and the Discord server's voice channel being more regularly used, so I figured I'd get some practice in with actually talking and using my voice. You can find it here if you're interested in what I sound like.

So with that out of the way, let's get into the standard postmortem. Before I get into anything else, my motivations for writing this story need to be clear. When submitting this story, my main goal was just to finish a Writeoff to the end. My last Writeoff was Illusion of Choice, all the way back in November. You may remember me better as MDNGHTRDHTLN from that contest, and I disqualified myself and my entry during that round and walked away pretty miffed. It's been a long time, and it's been a combination of finishing licking my wounds and not having any inspiration or time to enter a Writeoff. So with this fic, I just wanted to know if I could do it again and get back into it.

Now with that out of the way, let's get onto the story. The main thing I was trying to do with this story was a sort of "context through imagery"; instead of explicitly confirming why the woman may have been bombed or what she saw, I wanted to indirectly nudge the reader in the direction of their own conclusion by the choices I made with my poetic devices. It's something that I was inspired to do by Toni Morrison's "Beloved", which is a novel that almost bridges the gap between fiction and poetry. She does something similar with her prose, and it's something I wanted to try for myself.

For some people, it went over pretty well; Not_A_Hat told me in private conversation that he thought the woman was a spy of some sort, and that's why she was bombed. For others, it didn't, and they weren't sure why she may have been bombed. In my own head, she was an FBI agent. There was actually a line in the second draft of the story that explicitly said she was an FBI agent, but I cut it out both because it would push me over 750 words and because it would directly undermine what I was trying to do with the imagery. If I'm trying to give context through imagery, why would I give explicit context? It would render the point of the imagery useless.

But, well, that's the standard postmortem. Next, I'll look at some of the common criticisms of Second Chance.

This is more of an introduction than a story.
This is pretty true. I knew that stories being more introductions than actual stories is a very common criticism during Writeoff rounds, and I also knew that I didn't really have the time, dedication, or effort to make a self-contained story, so I just figured that I would play to the story's strengths instead of compensating for its weaknesses. I figured that good in one area but lacking in others was better than mediocre in all of them. If I had more time or space, I may have been able to make something better in all areas, but that's not something I can really say for certain. Still, people said it was at least an interesting introduction that made them want to read more, which is something an introduction is supposed to do, so I'd say I did well on that front.

There's little in the way of description, aside from what she hears.
I don't really have any specific reasoning for this. It started because I was binge-watching Daredevil's second season the same day I wrote this story, and Daredevil is blind, but has a very acute sense of hearing (so acute that it's one of his superpowers). In the original draft of the story, I had a line that described what she saw:

Everything was so hazy. The whites and blues of the hospital room bled together, dripping into each other, slathering the room. She couldn't tell what was where with her eyes. But she could with her ears.

I cut it out for three reasons: one, it was taking up too much wordcount, and I needed all the space I could get. Two, it disrupted the flow of the story and stuck out like a sore thumb. Three, I never really used any other visual description, so it felt like a weird detour that never really went anywhere. It didn't add much to the story, especially since I figured I could get by on the basis that most of us know what a hospital room looks like. If I had more space, I would have almost definitely put more visual description in there, but as the story was looking, there just wasn't the space or the use for it (at least, while I was writing it).

Those were the two big issues people had with the story. Next, I'm going to address anything that I feel needs more attention to specific commenters.

>>Ratlab
Thanks for the kind words! I'm at least glad you thought the descriptions that were there went over well; description has never been my strong suit, so I was worried that it would be a weak point. But, based on what you and some others have said, it was the opposite.

As for the "nitpicky" thing you said, I don't really mind. The devil can be in the details, and I think an important part of any art is how the details support the whole. I don't think pointing out repetitive sentence structure is nitpicky at all, and I appreciate you pointing it out, because I wouldn't have caught it otherwise.

>>The_Letter_J
Vaguely funny story about the reading: I was about to go to bed when Hat said "I'm going to read Second Chance next". I had to catch the reading of my story. I recorded my own reading, but I don't know if I'll put it up unless someone wants to hear it.

Yeah, the guy talking definitely isn't the one who had her blown up. He'd have no reason to visit; she's on the do-not-resuscitate list and no one has fed her in a few days. She's very close to death; he'd just have to wait a bit longer and he'd be out of her hair. I don't really have anything for him in my head, but looking back, I was probably intending for him to sound like some sort of employee for a rival government agency, foreign government, or shadowy corporation. Something off-the-books and clandestine who really wanted access to the secrets of whoever his target is.

I never really thought too hard about the time travel aspect, but the story ending because the timeline ends is an interesting thing to think about. I always have issues with time travel, because whenever you go back and change something, the timeline in which you went back and changed something ceases to exist, so you can't actually go back in time and change something because it never happened. Time just automatically corrects itself. Still, it's an interesting angle to think things from.

>>Not_A_Hat
Yeah, I agree with you on the "settling for banality" bit. I'd much rather try something big and fall short, than be comfortable in mediocrity or what is otherwise expected. That's how art stagnates, I think, and I don't want my art to stagnate.

>>Monokeras
That is a comma splice, but I would consider it acceptable. Comma splices are generally thought to be fine if the spliced clauses are both short and similar enough in structure, and I'd say that both of those sentences are. And you'd still hear footsteps both inside and outside the door; putting the footsteps before the opening door would disrupt the flow of the paragraph and be ambiguous if there was someone already inside her room or not, so I started with the opening door and moved onto the footsteps that were closer and much louder (since they're no longer muffled by the door; even with her hypersensitive hearing, they'd still be much quieter than if they were inside her room).

It's maybe not a "weird" metaphor as much as it is an uncommon one, but there's a reason I picked it. There are a thousand different ways I could have described what it was like to remember the accident, but I chose that because of the connotation of baptismal water. When you're baptized, you're reborn in the eyes of the church, and her dying and going back in time is her own rebirth. She's literally reborn in the sense that she died but is now alive, but she's figuratively reborn in the sense that she has a new chance at life and a new goal in mind.

I don't really know what I could do with it being too long; most people seem to think that it could use more on its bones, what with more visual description and context. I'd venture to guess that you were just bored by it, and I'm not sure there's anything I could do to make it more interesting outside of expanding it.
Post by Murmurpunk 4 years and 5 months ago, deleted 4 years and 5 months ago