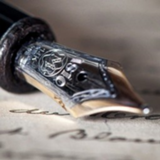 bookplayer
#127 · · 4 years and 8 months ago · >>Southpaw >>CoffeeMinion >>Trick_Question >>RogerDodger
Reading over the concerns about the change, I have to say I fall on the side of the people who find adding another site to regular browsing habits to be awkward at best and a disincentive at worst. If Bradel hadn't mentioned that he might have an idea for the prompt, I probably wouldn't even have bothered to come here and look at it.

When it comes to any other website, this would be a perfectly good compromise. I can use all sorts of functions on FiMfic to talk about pony stories... or I can start a thread on reddit, or a page on TV Tropes. I can comment on a story's fimfic post, or a story's EqD post. Knighty has no opinion on this; he offers the tools he wants, and we use or don't use them, or use totally different ones.

But... Roger seems to have opinions on this, from what I've seen in the past (when Bad Horse wanted to try splitting the discussion thread between two threads on the same forum.) If that's changed, and Roger doesn't care if I make a "Writeoff Underground" group on FiMfiction where those of us who are less into another site to follow can talk writeoff, let me know!

But I think that's the core of the problem. Think of it like a writer on FiMfiction: We write a story, it gains a following, and of course they shouldn't dictate the direction we go; it's our work and our story. But we don't get to dictate how our readers interact with the story. They can read it right when we post it, they can download it to their kindle, they can talk about it in the comments, or review it on a blog, or talk about it with their friends someplace totally different.

The creator creates what they want, the audience chooses how to interact with it. Neither side "owes" the other by default.

The only thing specific to the writeoff that I could see being a problem is if people were compromising anonymity on the alternate thread, but there are a million places on the internet we can compromise anonymity away from the watchful eyes of Roger, and he can't monitor all of them.

So... if Roger doesn't have a problem with it, would people want me to make a group on FiMficiton for off-site writeoff discussion?

If Roger, or someone else does have a problem with it, why?
bookplayer

bookplayer
#133 · · 4 years and 8 months ago
>>Trick_Question
The thing is, I agree with the assertion that Roger has the right to take his site in whatever direction he wants. He doesn't owe us a MLP based contest, anymore than someone who starts writing a fic about Twilight has to keep Twilight as the focus character of the fic. The audience might not like how it's done, or they might be split on it, but it's the author's choice to do that.

But for those of us who participate in the MLP events, and spend most of our time on FiMfiction, I don't see a reason why we shouldn't be talking about it in the places we gather (FiMfiction.) As the audience of the fic, we don't owe it to the author to read everything he writes, we can read only the sections about Twilight and talk about those on a Twilight group if we want.

If that's not how Roger wants us to interact with the contest-- if he wants to encourage full participation in every event or if he wants to entice us to gather all in one place-- it's back on him to take into account what the audience wants. He doesn't have to do that, but it's certainly worth looking at it if it's part of his goal for the writeoff.